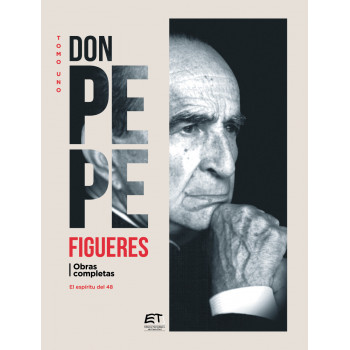 Don Pepe Figueres. Volume I: The spirit of 48

Throughout many years, different people exhorted my father to write his memoirs on the Revolution of '48. I always heard him answer that he did not do so so as not to open the wounds of the war that healed year after year.

He finally gave himself up to that task. I remember his dedication and determination to write; the many conversations that he had with fellow members of those deeds to remember episodes that he wanted to narrate, and many others that he preferred to omit so as not to open new wounds. The drafts of the texts corrected by dad in long nights returned to the typewriter in the morning, to end up in his hands again and enrich them with the same affection with which he forged so many achievements throughout his life. Our dear Don Pepe often said that all human work can be improved as long as there is the will to do so.

There are many aspects that I could highlight about what is written in this book. I prefer that you, dear reader, establish which ones you want to remember after having read it. However, there is one fact that I wish to emphasize: the Pact of Ochomogo.

Towards the end of the war, the revolutionary forces descended from the mountains near La Lucha in what became known as the Phantom March, to take Cartago after fierce fighting in El Tejar de El Guarco. Once in Cartago, they regrouped to take San José, a fact that clearly represented the possibility of a bloody combat. The government of President Teodoro Picado Michalski was falling. The communist party, led by Manuel Mora Valverde, his secretary general, had been the main military support in the war and represented the institutionality of the moment.

The efforts of some to prevent the taking of San José led to a secret meeting at night in Alto de Ochomogo. On the one hand, Don Pepe and Father Benjamín Núñez, chaplain of the Revolutionary Army, would attend. On the other hand, Manuel Mora and Carlos Luis Fallas (Calufa).

Despite their differences, and despite the blood shed by thousands of Costa Ricans in fighting between the forces they led, both were able to reach agreements. Mora would ask his troops to lay down their arms. Figueres assumed, and therefore would respect, the achievements of the workers, the Labor Code and the social guarantees that had been promoted by President Dr. Rafael Ángel Calderón Guardia. Thus a combat for the taking of San José was avoided. My father later strengthened those social guarantees.

As of this writing, the national tension has reached extraordinary levels. The spirit of the Pact of Ochomogo is necessary to reconcile our differences and make our way towards well-being. If our ancestors knew how to place themselves above the war to make way for the construction of the Second Republic, we must also take steps to dialogue and agree on the best options for the future of Costa Rica.