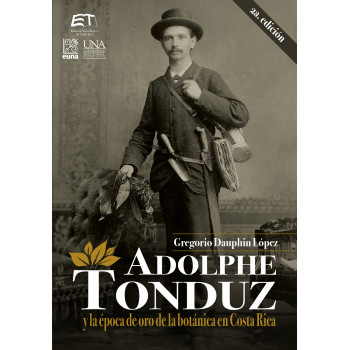 Adolphe Tonduz and the golden age of botany in Costa Rica

Certain times in the development of humanity have been characterized by their effervescence and diversification of artistic, technical, intellectual and scientific activities; one of them occurred in the late nineteenth century in Europe and North America. At that time, currents of change were generated that would later define many of the trends in today's world.
The once endless virgin forests and impassable rural roads, plains, rivers and mountains of Costa Rica, as well as the city of San José, were also the scene of such effervescence. Here, botanical explorers like Adolphe Tonduz, Henri Pittier or Paul Biolley, with sweat, effort and collaboration, laid the foundations for the scientific exploration of this small Central American republic, and made it stand out in Latin America.
In the second edition of the work Adolphe Tonduz and the golden age of botany in Costa Rica, reference is made to this feat by incorporating, in addition to the pleasant stories of the Swiss naturalist, his agronomic texts, which represent the beginnings of the fight against pests of tropical crops of economic importance, such as coffee, bananas and cocoa. New and updated images of the actors, settings and correspondence have also been included, which constituted the primary source of the work.
Aimed not only at professionals in botany, natural science, and history, but also agronomists, anthropologists, and the general public, this book transports us directly to the context of Tonduz, as well as the dawn of modern Costa Rica.