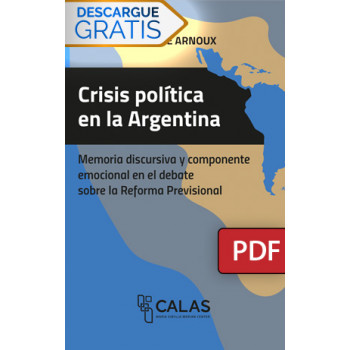 Political crisis in Argentina. Discursive memory and emotional component in the debate on the Pension Reform (DIGITAL BOOK PDF)

The debate about the Pension Reform, approved in December 2017, starts the current political crisis in Argentina. The parliamentary process showed strong tensions, which accentuated, a few months later, around the agreement with the International Monetary Fund. The author addresses the positions at stake and their inscription in antagonistic discursive formations, based on the ways of referring outside the premises, the memories that are activated and the semiotization of emotions.
This book may interest discourse analysts and social science specialists interested in both the discursive deployment of representations and recent Argentine history.

Political crisis in Argentina. Discursive memory and emotional component in the debate on the Pension Reform
₡6,000.00