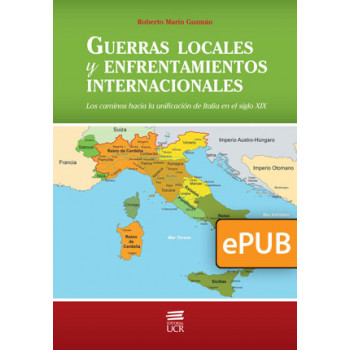 Local wars and international clashes: the roads towards the unification of Italy in the 19th century

This book reconstructs in a clear and didactic way all the political processes of Italy in the 19th century, in which the Church and the papacy were involved. It also explains the economy and society of the time, social problems, tensions between peasants and landowners in the south of the peninsula, among others.

A Century Of Palestinian Immigration Into Central America. A Study Of Their Economic And Cultural Contributions
₡1,800.00

State of the Question on Mahdiyya: Study of the Sources of the Mahdist Movement in the Sudan
₡5,000.00

Local Wars And International Clashes: The Paths Toward The Unification Of Italy In The 19th Century
₡5,500.00

Introduction to the Study of the Islamic Middle East: Historical Trajectory. Continuity And Change
₡1,500.00

The Israeli Military Occupation Of The West Bank And Gaza
₡2,000.00

Marginalized. Discriminated And Excluded From History In Medieval Islam: Study On The Slaves. The Lepers. Women and the Poor
₡4,500.00