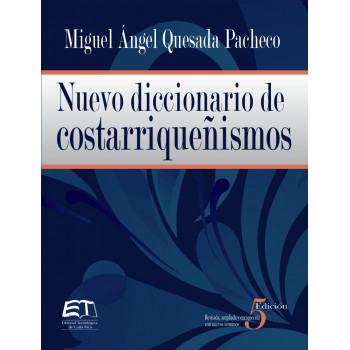 The New Costa Rican dictionary is a valuable contribution by Miguel Ángel Quesada Pacheco to Costa Rican lexicography in particular, and to Hispanics in general. This work is now in its fifth edition, which presents substantial changes over previous editions, both in form and content.
Thanks to the proliferation of works of botany and zoology, it was possible to record a large part of the vernacular words that appeared without a scientific name in previous editions, at the same time that many other words were renamed.
In addition, some words were eliminated because they were words belonging to the pan-Hispanic linguistic heritage, of general use. On the other hand, another group of voices was included, not without leaving out, as far as possible, words or meanings of recent creation. Other entries have been reformulated their meanings, due to the semantic changes that have happened in recent years.